Dressed to smuggle paprika bags. „They always paid good money for it”

A colleague of ours, Eva, shared this lovely family story with us. The story is made of paprika bags, commercial opportunities and some colourful people from the Szeged region. But most of all it portrays the ingenius creativity of women.

During the early years of communism (1950’s) free trade of goods was totally forbidden. However, for the farmer population around Szeged there was nothing more natural than selling, buying and exchanging goods without any restrictions. Since the paprika fields were believed belonging to nearly everybody, many expected the value of the paprika powder originated from those fields to be theirs, too. Because it was impossible to solve this in a legal way, merely forced by need, women were hiding bags filled with valuable paprika powder under their dresses and took them to the town to sell to private customers.

Eva: “Every day after work I visit my Mom. She is waiting at the door always asking ‘What’s up with you? Are you tired? Do they buy the paprika?’

The other day I told her: „Yes, they are buying it, we’re now preparing for Christmas, wrapping it in small gift paprika bags, decorated with small red dots and flowers.”

Then she said ‘Oh hell, they always paid good money for it! Long ago your grandmother put such little paprika bags under her skirt on a belt around her waist, and pulled her coat over it, as they brought her to the city to the market. In those days it was not allowed to deal or take paprika in any shopping basket or any bag. But then every family in the village had 1-2 acres of paprika, and they needed to make a living.

At home in the summer kitchen, we dried our own paprikas next to the oven, Tata crushed them in the wooden treadmill, Mama sifted the flakes. 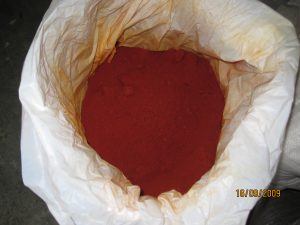 Your Grandma sewed textile bags for the paprika, she filled them with the crushed powder and wrapped the little bags around her waist. Off she went to Szeged, where people were always looking for paprika. She would hide the paprika bags under her coat. The dealers always first asked for a little sample so she wrapped some in paper. They checked the color, smelled, tasted and measured it. She walked a lot from the railway station all the way towards the marketplace, where the dealers were located under the arch-passage. There were some shops, but the police was always controlling and even body-searching women on the street.

One day your Grandma was stopped on the street by the police. There were other women standing there and they were being questioned, too. Mama was carrying one last bag on her waist but she was adamant and denied. She was not afraid at all but was wondering how to get rid of her bag. She quickly dropped the bag in one of the cellar windows where she was standing while the police was questioning other women. When it was her turn, she answered back: ‘How on earth would I have any paprika?’  The next day Grandma returned for the little bag and then continued smuggling paprika to the dealers. It was really worth it, they paid well for the paprika!’