In the Hungarian calendar we call the 12th, 13th and 14th of May as the name or feast-days of St. Pancras, St. Servatius and St. Boniface of Tarsus respectively. These three saints are referred to as the Ice Saints in many European countries and this name comes from the traditional belief that frost is likely to occur on the nights of these days. There are minor differences in the calendars, though. For example, in France and Germany frost may hit as early as on the day of St. Mamertus, the 11th of May, and that’s the first day of a three-day long frosty period. 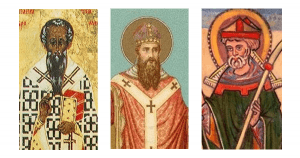 Besides the three days of the Ice Saints in May, there are other important calendar days which mark to-dos in agriculture: on Lady Day, the 25th of March, people used to start work in the orchard, and on Saint George’s Day, the 24th of April, it was time to drive the cattle to the summer pastures. These customs root both in Roman Catholic religion and folk beliefs and are closely related to the cult of Virgin Mary and different saints.

On the days of Ice Saints old Hungarian peasants used to expect that the weather will turn suddenly much cooler, although the spring has already arrived, moreover almost has gone. By the way, it happened truly many times, we know the observations and descriptions as proofs. Because of the weather conditions and the fear from the frost, the fastidious plants, like tomato, bean and paprika were planted just when days of Ice Saints have already passed. Of course, in some unlicky years the frost has arrieved after Ice Saints and that time the paprika growers of Bogyiszló (small Hungarian village, nowadays South of Transdanubia) used to say: ’The great customer has arrieved and took all of the paprika!’ They meant the frost, what has destroyed the plants.

We can see the fear from Ice Saints in a lot of Hungarian (even Middle-European) folkway and superstition. In Berettyóújfalu, East of Hungary they mentioned the Hungarian names of Ice Saints and they used to say: „Szervác, Pongrác, Bonifác / Megharagszik, fagyot ráz. / Get sore and sprinkle frost”, word for word. In English, they say the rhyming lines: „The cold snap in May? / Are the Saints to blame?”.

What about this year? Is the frost a real threat? Actually we have to say the rain caused much more problems than the Ice Saints. Hope the weather will be sunny and we will have nice, red paprika fruits in September!