Memories of ten years of our Paprika Museum

We’ve turned ten. On 17 April 2008 we opened the Paprika Museum at PaprikaMolnar’s factory. Since then we’ve had over ten thousand visitors from Hungary and abroad.

We built the museum to commemorate and show all the effort that went into the creation and making of a special local product that proved to be so emblematic in the life of twentieth-century Szeged. As a Hungarian American put it a hundred years ago: ‘Paprika put Szeged on the map of the world’. Tens of thousands of people in Szeged at any time between 1900s and 1980s were involved in paprika growing and production. It was a basic source of income and helped many families prosper.

To our greatest surprise, the Paprika Museum to many meant a whole lot more than just a museum. I remember Dragan, a New Zealander for decades, who recognized in the photos the growing technology his Bulgarian gardener parents in the fifties used. His parents had migrated to Hungary in the 1920s and introduced innovative gardening techniques where they settled in south-east Hungary. A woman from as far as Tasmania almost broke into tears when she saw in the photos the local women from Röszke working with paprika because they reminded her so much of her Hungarian mother. She said, touching the women in the photos, nobody in Tasmania has those lovely round-shaped knees and elbows as her mother and these paprika women had.

The non-Hungarian family that came from the farthest was Clifford and his wife. Clifford had worked in paprika research in California in the 1960s and participated in a paprika conference in Szeged then. Another interesting visit from our own profession was paid by a big group representing an agricultural cooperative from South-Korea, who were especially interested in our paprika dehydrating machine.

Our most famous visitor was Marianne Krencsey, a lovely actress in the 1950s. The busiest and funniest time was filming a paprika show by Gasztroangyal, a popular Hungarian gastro  production. In May 2011 we planted paprika with the Mayor of Cambridge and other local municipality government people, they tried weeding and watering also and drank it down with paprika pálinka. During the same museum visit a Cambridge mathematician would crochet a paprika.  It was most surreal.

And there were a whole lot more people and visits I remember: families that chose to spend their holiday in south-east Hungary, schools groups and projects, and people who were hunting for past memories and an image of a Hungary that has recently become a thing of the past: houses where there are paprika garlands hanging everywhere.

What has happened to Hungarian paprika in the meantime? Good news is the name “Szegedi paprika” became a Protected Designation of Origin in the EU in 2010. In 2016 Szegedi paprika was enlisted among Hungarian National Values, thus became a Hungarikum. Bad news is the growing area has further decreased. However, we aren’t giving up, because like for many of our visitors, the Paprika Museum that we created, the content we have been building has grown to mean a lot more to us than just a museum. Thank you for visiting. 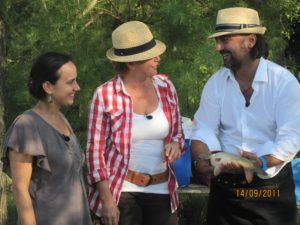