Paprika is in the air is the title of a collection of essays, short stories and articles written by Zsigmond Móricz, early-20th century writer and columnist, which he wrote during his numerous visits to Szeged, Paprika Town. Many decades later the writings recreate Szeged people before the war, and the reader can’t help but marvel at the funny and witty conversations and the pious and canny view people in those days had on life and matters.

In 1940 Móricz goes to the Szeged central marketplace in front of the Town Hall, where he meets Auntie Agnes, a seventy-year-old street vendor, who buys and sells fruits and vegetables. Auntie Agnes never married but has many kins, nephews and nieces who she’s been helping out throughout her life. Whenever a relative was about to marry, she would gift a belonging from her household to the newly-wed couple: a table, a chair, bed linen, a chest of drawers, money.

At seventy, she feels she’s ready to retire and live on the little she’s saved and not given away. Relatives however continue to pour in, and Auntie Agnes continues to help out until a few years later when she finds she has hardly anything left. Well, almost nothing! She still has her old baskets left, nobody wanted those. So, she returns to the marketplace in front of the Town Hall to her old stand and to her old profession: selling fruits and vegetables. People she used to know from the old days greet her happily. The mayor, for instance, walks by and says:

“Good morning, Auntie Agnes! How are you?”

“Very well, love! And yourself? Going to the office?”

“Well, God bless you and give you good health, sweetheart!” says Auntie Agnes cheerily to him.

When the policeman comes he scolds her for not knowing the new rule: street sellers must properly display the price of every product they sell on a pricetag. If they don’t do it, there’s a high fine to be paid. Auntie Agnes cannot read or write and asks the policeman to do the writing for her but she receives refusal: the young policeman is too busy and it is beneath him to help out. So, Auntie Agnes goes to the police station and pays the fine duly, though she clearly thinks it is absolutely unnecessary: what a big hassle for those small writings. She’d rather make sure to keep her fruits and vegetables nice and fresh.

Days later the policeman revisits the marketplace and finds that Auntie Agnes still doesn’t display the prices. She gets a fine again, this time she needs to pay double the price of the first fine. She goes to the police station again where the officer questions her why she hasn’t displayed the pricetags. Auntie Agnes gives a clever answer:

“Yes he did, but I wish he hadn’t! People who walked past my stall and looked at my writing started laughing. So, I asked them what is so funny?”

“Auntie Agnes, just look at the writing on your strawberries. It says: This old woman is available for sale.”

The captain at the police station laughed so hard at this story that he decided to let Auntie Agnes go without a fine this time.

Is this story true? You bet it isn’t. Auntie Agnes would never have allowed anyone to make such a fool of her. However, she enjoyed the crack and she enjoyed making a fool of herself in order to avoid paying the fine. 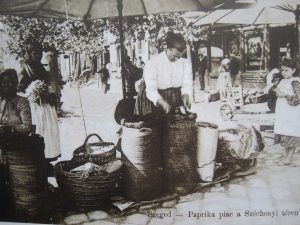