Capsaicin in health and war and on Netflix 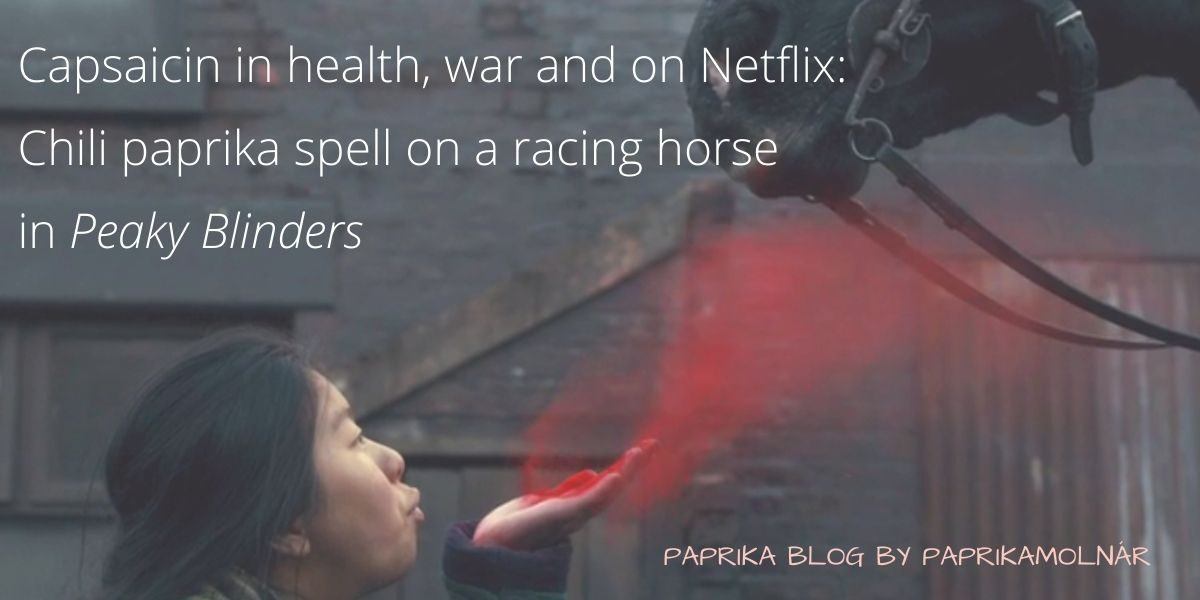 Capsaicin is a compound in chilis and paprikas that causes hot sensation in the mouth. We’ve written about it before, people like to hear about it in the Paprika Museum, but we like to return to the topic, because it is the capsaicin that makes spice paprika popular as food. Hot food is thought to help in losing weight, so what other time should we talk about it than at Lent? The capsaicin’s popularity, however, is obvious in other ways, too: it carries images of power, risk, threat and even magic! It may be a weapon, a spell, a magical cure.

Capsaicin in health and diet

We’ve earlier discussed the beneficial effects of hot paprika as our ancestors saw it. The capsaicin in the veins or placenta of the hot paprika fruit fights inflammation and fever, alleviates sores, helps blood circulation and helps keeping blood sugar levels under control. It has also been proven that it has an active role in burning fat: the capsaicin compound stimulates the receptors of fat cells to actively burn energy instead of storing it. So, spicy food seems to help in losing weight!

Capsaicin is a biting and penetrating substance and as such it can have very negative effects, when applied directly and in high concentration: strong skin irritaion, shortness of breath, even blindness. These characteristics make capsaicin products “ideal” for threatening and agressive use.

Burning chilis in the indigenuous Americas

Native Americans burnt chili and used the biting smoke to repel wild animals and to protect their food gardens. The Codex Mendoza in the 16th century noted about Aztec society that naughty children were punished with hot chili smoke. The same burning smoke as well as a concentrate from the raw fruit was sprayed directly at the enemy as a fighting method.

Paprika or pepper spray  is a self defense spray for civil use that was originally developed to keep away animals like bears or dogs. It is known as a lighter form of tear gas, which is used in policing. The spray causes temporal blindness, a burning sensation in the eye, throat, nose and on the skin. Because its direct and concentrated use can be extremely harmful and might even cause death, its civil use is restricted and requires responsible usage. However, it’s fairly easily available in places like hunter or weapon stores.

The intensive and powerful characteristics of hot paprika and chili – the deadly heat, the enchanting effect and healing power –  make them real action heros on film.

By coincidence we recently stumbled upon PAPRIKA featuring in highly-rated award-winning Netflix series! You needn’t bingewatch the whole series – it’s right there in the beginning!

In Peaky Blinders Season 1 Episode 1 a horse is drugged with an oriental spice including chili from Chinese immigrants in Birmingham 1919. The scene is spectacular: a woman is blowing lightly some magic red powder in the face of the dark horse and thus casts a spell on it.
In Orange is the new black Season 1 Episode 2 when the newcomer inmate is boycotted by the chef of the prison-kitchen, she turns round the chef’s sentiment by creating a healing balsam containing capsaicin and cacao, which works a miracle on the chef’s back problems.
Brought to you by the Paprika Museum.