Devastation and reconstruction. The Great Flood of Szeged 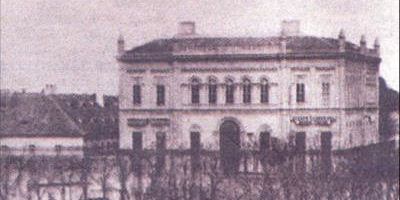 „The water came in on us on St Gregory’s day… oh, what an ugly devil that was…. And the strong winds that drove the water all the way…. I had an old boat and we used that for fleeing. When the water was coming, it was rolling like rocks, high up! It was roaring loud… I remember I thought no one, not even God has as much money as to pay for all the damage Szeged people are about to have…” Zsigmond Móricz wrote down this eyewitness account of the Great Flood of Szeged on 12 March 1879 in his essay collection Paprika is in the air. This post is to commemorate the Great Flood that destroyed Szeged 140 years ago.

There was nothing that could have stopped the river in 1879. Now we know the flood had to happen at some point because the city had not equipped itself for defence adequately. There had been no proper water drainage and water defence system in place. March and April is inundation time for the river Tisza when the melting snow from the north-eastern Carpathians is running into the river every year, but in 1879 the flood was coupled with days of stormy winds and high water coming from the river Maros, that brought extra water from towards Transylvania.

The damage was unimaginable: apart from the few streets in the very centre of downtown the entire city was flooded and stayed under water for three long months. 140 deaths, a minimum of 5400 houses collapsed and of the city’s 75.000 inhabitants 60.000 became homeless.

The survivors gathered on the medieval castle wall and were hopeless in the first days. What followed, however, was a miracle and the story of the reconstruction of Szeged after the Great Flood is a story of rebirth and starting a new life for many.

The first idea was to rebuild Szeged at a new location further away from the river. But then, as defence workers and promises of help started to pour in from close and afar, the idea rooted that a modern town must be rebuilt on the original grounds. Construction workers from neighbouring Makó, Hódmezőváshely, Timisoara arrived and thousands of voluntary workers threw themselves into the rescue work. On 17 March Prime Minister Kálmán Tisza and Franz Joseph, Emperor of Austria and King of Hungary, visited the ruins of the town and started discussions of arranging financial and physical support for the rescue work and reconstruction. Russia, Germany, Italy, England, France, Belgium sent financial support for the reconstruction and Szeged recognised and thanked this help with naming the newly built ring-road in honour of the help. The ring-road is divided into sections by avenues and the different sections to this day are named after the capitols of helping countries: Vienna, Moscow, London, Paris, Brussels and Rome. Well-known Hungarians like Franz Liszt, Tivadar Csontváry Kosztka, Mihály Munkácsy, Mór Jókai, Kálmán Mikszáth used their fame to gather support and help for the newly-built city.

The reconstruction took decades and as a result Szeged became a modern and beautiful European city by the turn of the century. In place of the old, Szeged became a new melting pot for new ideas, new lives and new aspirations. Szeged-Alsóváros known as Paprika Town was born after the Great Flood, in the wake of the reconstruction years. The houses decorated with the sunbeams on the house-gables were all built at this time, giving home to people who found a new source of income in growing and producing paprika. It was these people and in these years that invented and started a career for Szegedi paprika.

Time and history proved Franz Joseph, who promised to the people of Szeged in 1879 that “Szeged will be more beautiful than ever before”.