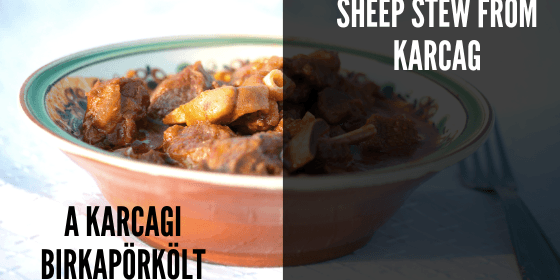 In an earlier post we explained the differences between paprika, stew and goulash. It will be important to remind the features of a true authentic stew, as in this post, we will introduce Karcag sheep stew, another Hungaricum.

The recipe for the Karcag Sheep Stew can best be learned through telling the local history of Karcag located in Nagykunság: Find yourself a special group with a solid identity. Add some tradition and apply a centuries-old gastronomy, season it with plenty of paprika, and you have made yourself a real sheep stew!

Karcag’s population is of Kun origin and has always been a proud and closed group. Although farming horses and gray cattle has been cultivated at a high standard since the Middle Ages, these animals were not included in the average Karcag menu. The famous gray cattle of the Great Plain were more of an export commodity and large herds were sold in western countries. Instead the basis of nutrition here was sheep, which is a truth that has not changed to this day.

The recipe of the Karcag Sheep Stew

Since this is a stew, the preparation of the food begins with the fast scorching of the meat pieces without adding any liquid, which is also true for the Karcag sheep stew. However, it is only in this particular stew that first the meat is pre-cooked in a cast iron pan that fits a whole sheep. The “parts” of the sheep are placed in a strict order: first the bones and the lean meat, then the pre-scorched head and finally some of the entrails, such as tripe, are placed on top.

After 15 to 20 minutes of scorching, we add some garlic and salt to the meat, and as by now some juice appears, this is the in which the meat is actually slowly cooked. The onion then, dipped in some lard with paprika, is poured into the giant pan towards the end of the cooking process. This is also when the essential part of the seasoning is timed adding some sweet and hot paprik to the stew. Paprika plays a key and basic role in the Karcag sheep stew since, except of salt, it is actually the only spice used.

When a whole sheep is being cooked at one time, it can well feed some 35-40 people which is why in the past large families always had some sheep stew on the table, and why today it is often offered on festive events. An old saying tells that “The head belongs to the honored guest!”, symbolising the special bite from the stew.

This authentic tradition is still very much alive today: the Karcag Sheep Cooking Festival is being held for the 21st time this year. 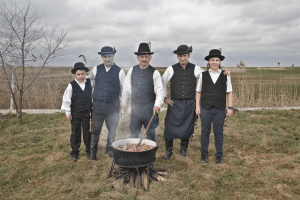