Item of the Week – II. The secrets of the Szécsi-paprika box 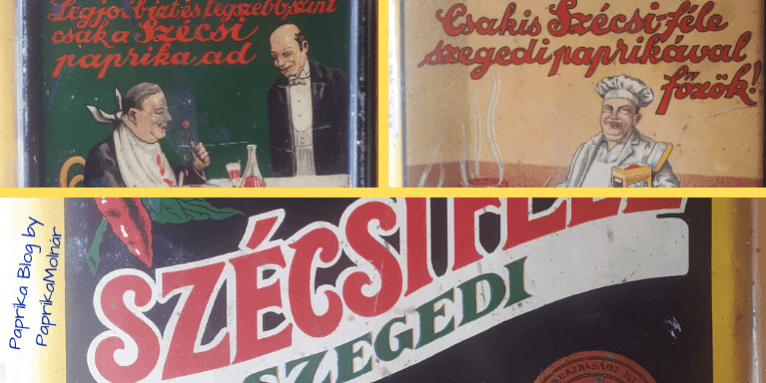 In our last week’s post, we covered a November 1, 1940 publication of Millers News. Today we continue our „Item of the Week” series by shining our light on a Szécsi-paprika box.

Similar to this item of Miller News, the Szécsi-paprika box is one of the most cherished treasures in our Paprika Museum. It is better not to talk about one single tin, but about a number of tins, since next to this specific Szécsi-paprika tin we have collected quite a number of tin boxes, that were probably all produced in a plate factory in a city, at times before World War II.

In this paprika tin we find a combination of histories united: the overall industrial history and the local history of Szeged. Metal plate factories, like in Győr and in Budapest, produced not only such tin boxes, but also children toys and tin boxes for storing medicines. Their key activity was usually nicely reflecting the political and economic situation at that time. The intensive production of paprika between the two world wars (plus the increasing control of the state) secured the need for such tin boxes.

Next to the Szécsi-paprika box, we have boxes from other producers as József Szeredai and Gergely Csonka. Their decoration and inscriptions provide a good basis for analyzing advertising efforts in those days. In fact what they advertised then is not so far from what we advertise today: Choose Hungarian paprikas, prefer local products! The Szécsi box itself is a beautiful exponent of an important episode in the history of Szeged and the heroic role paprika played in it.

The paprika mill of Szécsi István

In the mill of István Szécsi in Szeged they started grinding paprika already in 1876. Two pairs of millstones were added in 1882, and after that the factory was transformed into a steam mill. So the very first paprika steam mill in Szeged was one of the early achievements of the industrial revolution moving away from animal power. Unfortunately, a few years later in 1886 the mill burned down, although it was rebuilt the very same year. In 1900 István Szécsi officially became the owner of the mill, purchasing it from his father-in-law, Mihály Dobóczky. In 1905 he further expanded the mill, first with four extra pairs of millstones and two years later he even drilled an artesian well at his premises. Around this time they started to cultivate the famous sweet Szeged paprika, as this required a large pool of artesian water. In the end fully soaked paprikaseeds are far less hot.

In 1909 István Szécsi installed a brand new steam engine and in the following year he replaced the boiler. In 1916, to be able to handle all the paprika processing, he added a new building to the mill, while at the same time he had increased the mill’s capacity to 10 pairs of paprika mills. In 1921, he even established a paprika distribution point on the Boldogasszony Avenue.

We wonder if our readers at home are keeping their paprika in a tin boxes too. Maybe they are bringing some unknown family stories, or could be telling us more details about the history of Szeged paprika. In that case, do not hesitate to contact us, because we love to add such stories to our shared memory!