Fasting during Lent for many means keeping a strict diet, but now I’m looking at the word’s archaic meaning. Fasting combined with different forms of abstinence is an important feature in many religions. Roman Catholic peasants living in rural Szeged, like in other rural regions in Hungary, observed Lent until the middle of the 20th century. Their faith and the observance of the 40 day-long penitential period which we call Lent gave them a sense community, a sense of belonging together.

Lent follows Shrovetide, a merry period of celebrations and carnivals. It starts on Ash Wednesday and lasts until Easter. It is a period of keeping quiet, moderation and abstinence both in church and at the table.

The Roman Catholic rural population of Szeged took the observance seriously. Pig fat was substituted with vegetable oil and they often used special Lent dishes to avoid any cross-contamination with animal fat during food preparation. Paprika powder, which was a typical meat spice, was thus little used during Lent.

Here are two great meatless recipes with paprika powder that are good for both a modern vegetarian and a fasting Roman Catholic Szegedian, too. Well, if you are not too strict to allow using some eggs…

Stuffed cabbage for Lent:  make stuffing from rice, onion, paprika powder, salt and pepper and add some eggs to keep the filling together. Loosely wrap little balls of this stuffing into sour cabbage leaves and cook them in water.

Paprika pie: mix flour, salt and paprika powder, oil and sour cream to make a dough. Flatten it into a greasy pan (oops, no grease, just vegetable oil!), add grilled peppers on top and bake it in the oven. 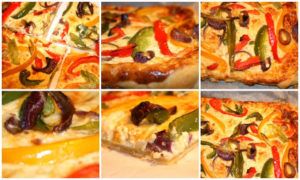