In our latest post on Hungaricums we shortly mentioned the famous sausages from Csaba and Gyula. Both of these places are located in Békés county in the south eastern part of Hungary. The history of the two types of tasty sausage shows some parallels with the history of Szeged paprika.

Thick sausage or salami from Csaba

The story of the thick sausage or salami from Csaba begins in the early 18th century when the butchers from Békéscsaba were forced to find an alternative recipeto spice the meat for their sausages. Pepper in those days was not available due to a trade-blockade during the English War in 1809. To replace the pepper the sausage-makers started using locally grown paprika in their spice mix. And that is how both the hot and sweet variant of Szeged paprika became basic ingredients of different Csaba sausages. Some 100 years later a 1936 book mentions that the town of Békéscsaba owes its reputation to its advanced meat processing industry.

In the preparation process, first the pork meat is minced to 6-8 mm and seasoned with a special spice mix. The meat-mix is then filled into thin skin made from bowel of pork or beef and treated for days with cold smoke (max 18C). The duration of the smoke treatment depends on the thickness, from min 2-3 days up to 6-8 days for thicker sausages. Finally the smoked sausages are hanging out to dry in cold air. Today these delicious Csaba sausages are sought after from countries all over the world.

Thick sausage or salami from Csaba

Only 20 km from Békéscsaba we can find another ‘homeland’ of aHungaricum sausage. Already in the 19th century, the fair in Gyula was a reputed place for meat traders from all over central Europe. Antal Stéberl was the person who saw commercial potential in this immensely popular homemade sausage. He removed the production from the farm of József Balogh and started scaling up the Gyula sausage production in a meatp rocessing factory. The following settlement of several meat processing factories started dynamically developing the town of Gyula.

The spice mix of the Gyula sausage is based on hot paprika with salt, pepper, garlic and cumin. The sausage meat is stuffed as twinpairs into pork bowels to be smoked with beech wood and then hung out to dry.

Since the beginning of large-scale sausage production, the “career” of the Gyula twin sausage  has been accompanied with awards. In 1935 it was awarded the 1st prize at the World Exhibition in Brussels and in 2010 the European Commission trademarked Gyula as a Protected Geographical Indication (PGI) for producing sausages. The Gyula twin-sausage was one of the first picked up in the collection of Hungaricums, thus proving the rich and diverse Hungarian gastronomic tradition. 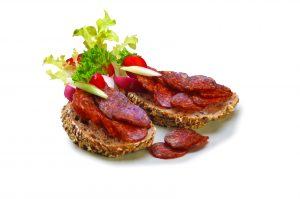