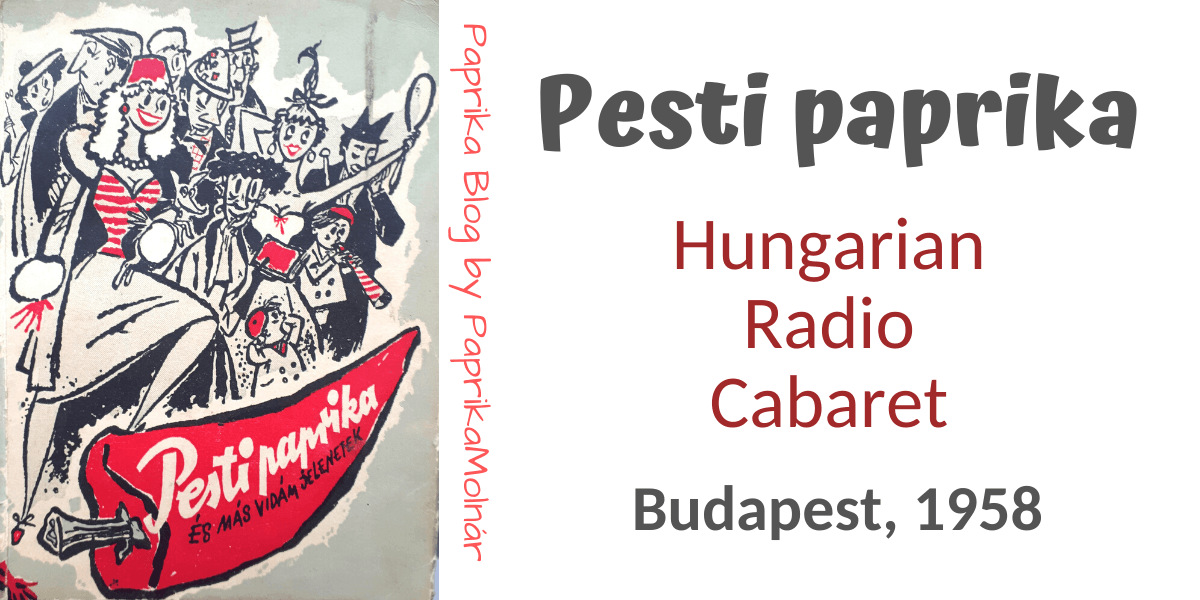 We’re now publishing a new literary series under the title Pesti Paprika. We’ve done this before with our literary series on Szeged called Paprika is in the air.  Back in 1958 the Hungarian Radio broadcast a three-part cabaret series under the name Pesti Paprika. The cabaret scenes are sassy, witty and funny. They tell stories of marriage, everyday experiences of life and even politics, which is especially surprising considering that the collection was just published a year after the aborted revolution, in the darkest hours of communism. The short, humorous and often striking scenes are giving a whole new meaning to terms like “paprika” and “spice”. Paprika here means that essence and life force we need to live and to survive. Pesti paprika is also rewriting what we’ve thought about public morale and atmosphere in post-revolution times. Pesti Paprika Cabaret is brought to you by PaprikaMolnár’s Paprika Museum.

So what is Pesti Paprika?

The cabaret host in the introduction to the radio cabaret explains:

“I must start with an apology from the city of Szeged, but I must confess there’s a paprika that’s older than Szegedi paprika. It is as old as Buda and Pest. It’s been around ever since people lived in Buda and Pest.

Let’s take a closer look at the nature of this strange agricultural product from the capital city. The Paprika from Pest is rooted in asphalt. It grows in apartment houses. In airless, dusty offices. On the concrete floors of factories. And, in the smoky air of coffee houses. Pesti paprika is the toughest plant in the world. It flourishes in heat and frost. No fire, flood, earthquake or war can do any harm in it.

Pesti Paprika is like a jungle plant: it grows speedily and mysteriously and it spreads everywhere.

Professor Kurtengruber gives an interesting and typical example of how fast Pesti paprika is growing:

„One day I was sitting at a table in Café Hungária when I noticed a prominent politician who was just saying goodbye to his company:

’I need to go because a friend of mine is waiting for me at Margaret Bridge,’ he said.

A journalist stood up from the table. ‘If you allow me, I’ll accompany you.’

’Are you also going in that direction?” the politician asked.

’No, I just want to finally meet someone who is your friend,’ the journalist replied.

Five minutes later a car arrived to take me all the way to Pécs – continues Professor Kurtengruber. I got in and we rushed to Pécs without any stops. Immediately after my arrival, someone asked me if I heard how a journalist addressed this prominent politician and told me about the scene I had just witnessed a few hours before.”

Pesti paprika is very similar to Szegedi paprika as both are spicy. They only differ in the way we use them. Paprika from Szeged is food-seasoning, whereas Paprika from Pest seasons life itself.

And, another thing: paprika doesn’t affect everyone equally. For some of us, a bowl of hot Szegedi fish soup means no problem at all, but others sneeze, cry and sweat from the heat it causes. The same is true for Pesti paprika: some will enjoy it and for some it is simply too spicy.

We’re all different. One thing is sure, though. If you cough, sweat and cry, don’t blame it on the paprika.”