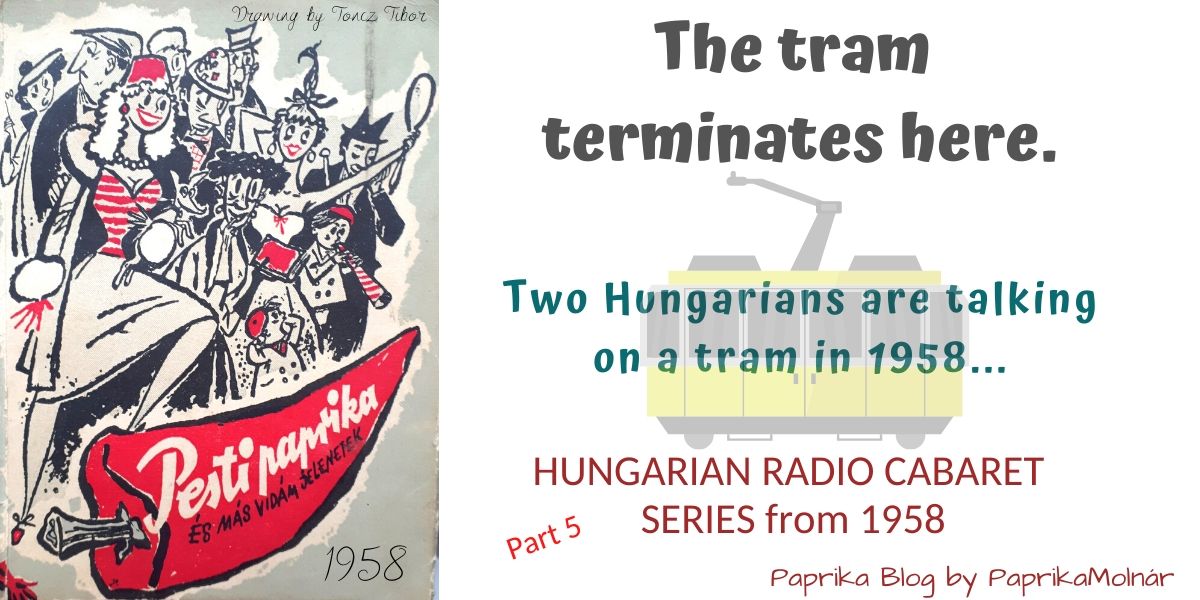 In the past few weeks things have started to get back to normal. As Budapest is slowly being opened from the virus lockdown, more and more people are out using buses, trains, trolleys and trams. Accordingly, we’ve selected a humorous conversation between two Hungarians from Pesti Paprika Cabaret series entitled The tram terminates here.

This particular cabaret scene we’ve selected reveals the strange inverted political criticism wrapped in humour that Hungarians are so good at. This requires the skill to read between lines. In English I’m adding a little explanation before the piece.

In this cabaret scene two Hungarian men, Mr Cukor and Mr Pasternak, who happen to be acquaintances, meet on a city tram and they share their feelings. The conversation is slowly flowing between them with small talk about how awful they feel about life, money and politics. This is 1958 and what you say is strictly monitored and you have to be careful not go overboard with criticism. However, a little irony and absurdity is allowed and the best way to express criticism is through humour. This way you have the illusion you can say what you want after all…

In The tram terminates here we’re led to believe until the last moment that the conversation on politics is taking place on Budapest tram and we feel a little uncomfortable about it, until…

MR PASTERNAK (sitting): Yes, the city tram… Come sit down next to me… How are you?

MR CUKOR: Well, if you ask my opinion… I daresay both of us are pretty stupid we stayed here. With such leaders! You know, Mr Pasternak, these days I don’t even like to read the new newspapers. Every day there’s a new regulation…

MR CUKOR: Yeah, I don’t believe these guys. I don’t trust them. They keep saying how hard things are but are they doing anything? No! Because they don’t have money or housing problems! What a shame! These guys are villains!

MR CUKOR: I don’t really care anymore. I’m only saying the truth… At first they said everything’s gonna be all right… And, what? You look around and all you see is unemployment and homeless people. These days if you get a job, you don’t earn enough to make a living.

MR PASTERNAK: Well, Mr Cukor, that’s not really what I’m most worried about…

MR PASTERNAK (worried): The atmosphere is awful. The lack of personal freedom. That’s unbearable. You can’t say anything they dislike. You say the truth and next moment the police comes and gets you. Am I right?

MR CUKOR: Yes, you are, unfortunately. – Well, we’ve arrived. The tram terminates here. (Stands up.) Let’s get off.

MR PASTERNAK (stands up): Mr Cukor, do you happen to know where Günther Strasse is in Vienna?