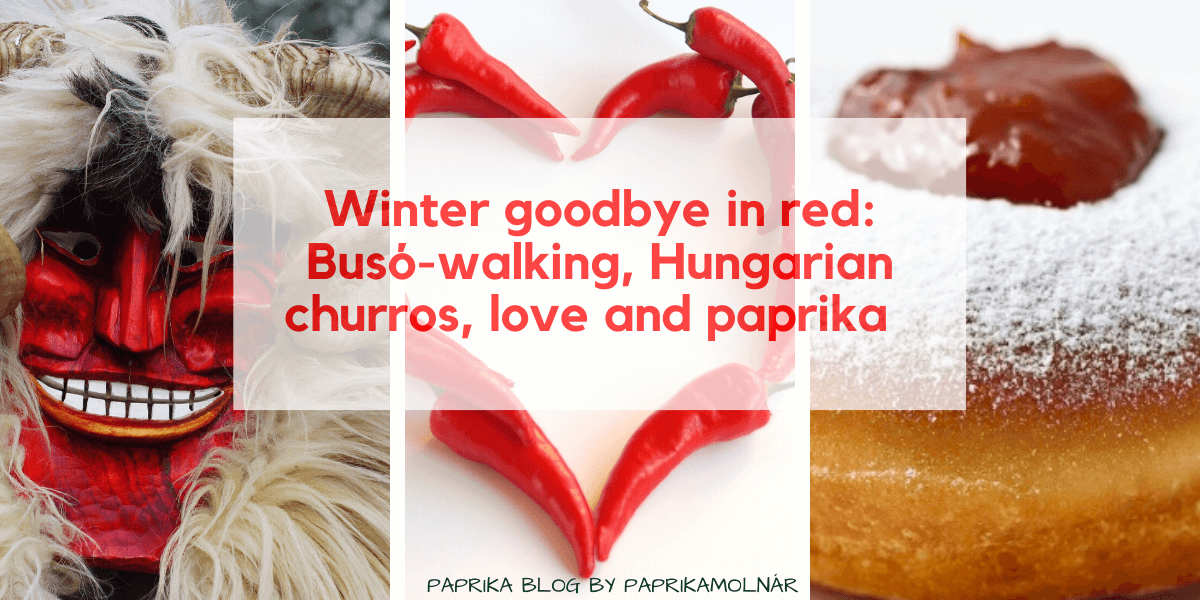 We’re in the middle of the carnival season, which in western Christian calendar is marked with parading, dancing, eating and merry-making. Colourful costumes, masquerades and masks, people engaging in earthly pleasures like eating and drinking, partying and dating are all hallmarks of the season. This time is intense with colours and images. The colour red, or preferably, paprika-red best expresses the essence of this saturnalia. This is our winter goodbye.

Paprika-red as a carnival philosophy

The colour red for most of us is associated with entertainment and love. For the same reason church leaders for centuries tried to ban carnivals and even called them the Devil’s feast. The Church saw the scary and devilish masks as manifestation of the devil’s temptation.

The most famous carnival celebration in Hungary – the legendary Busó-walking in Mohács – is well-known for the demonic masks the paraders wear. Read more here. The masks were originally painted with red animal blood.

It is interesting that the colour red can conjure up negative and positive connotations at the same time. It can refer to drama, war and blood. In Hungarian language a person whose “face turns paprika-red” is angry and short-tempered. To make things more complicated, “paprika-red” may not be nice on a face, but when used for other things, it means a nice shade of red. On a more positive note, red can also refer to fire, warmth, love and passion. In Hungarian we have two different words for these polar opposites: the dramatic, negative connotation derives from the word blood: vér – vörös. The positive or neutral red is piros.

Traditionally the carnival season is the time to find a partner for life and making engagements.  There’s even one special day designated exclusively for lovers: that’s Valentine’s Day on 14 February. Although many considers this day a modern celebration, it isn’t. Valentine’s Day (Bálint-nap) was a day for making love prophecies in the Hungarian folk calendar. The Anglo-Saxon Valentine’s Day originates in the tradition of a Roman bishop named Valentine in the 3rd century secretly marrying soldiers that were not allowed to be married to their beloved ones. The flower gift custom comes from this tradition.

The Paprika Museum likes to connect paprika to carnival celebrations.

You may make a bouquet of flowers with chili pods, which will add spiciness and drama to passion. Try and add paprika to colour food jelly and play with it like we did in the photo. You may mix paprika powder in oil and use it as paint for your mask. The devil-horn shaped paprika pods can inspire people to play: see this boy!

And, let’s not forget about the most emblematic food we eat in the carnival season: the guzzler soup, the carnival ham croissant, the ribbon doughnut or the csőrege, the southern Hungarian churros: see the two recipes here.

We wish you happy preparations making a real and unforgettable carnival celebration!